Ultraviolet light creates some really strange and beautiful glows from all kinds of surfaces, yet not everything lights up. So, why does UV light make things glow?

Starting with the basics, typical household ultraviolet lights, whether tube, bulb or LED, all emit light that falls into the part of the electromagnetic spectrum next to the visible (400-700nm) section called ultraviolet. You can see the UV region just left of the blacked out visible section in the diagram below:

“Black light” is what is usually emitted from non-commercial, household UV devices. Lights such as these perform a wide range of really useful functions such as locating hidden pet stains, producing super visuals at UV parties, or detecting counterfeit bank notes. Black lights are readily available because they’re quite safe, being longer in wavelength than the much more damaging shorter wavelengths of 320nm and below. Black light, so called because of its dull, low visible light emission, is a sub-section of UV light, residing in the upper/longer wavelength end of the UV range. This range of light is known as “UVA”, and falls within what is known as “near ultraviolet”. The complete range of UV light classifications (some overlap!) can be seen below:

The glow that you see when you shine UV light over a surface comes from “phosphors”. Phosphors are substances, typically with a strong/rigid atomic structure and prevalence of delocalized (see this URL for an in-depth explanation: http://en.wikipedia.org/wiki/Delocalized_electron) electrons, that emit light when exposed to radiation. In this case, the light from phosphorescence is in the visible part of the electromagnetic spectrum. Below is an example of phosphorescence from a home mineral display: 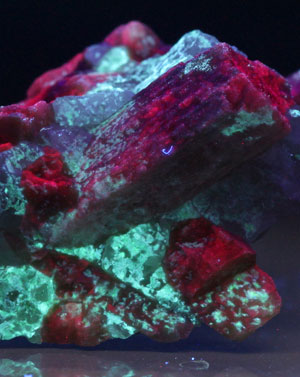 Energy from UV light is initially absorbed by electrons in these phosphors, forcing some electrons to jump into new, farther out and much more unstable orbits around the atomic nuclei they’re part of. Whilst in these faster, more furious, energy rich orbits some energy starts to escape them, cooling and slowing down their pace. This cooling eventually forces the electrons to fall back into their original, more stable orbits. It is primarily this sudden fall back into the electron’s normal, more stable orbit that results in the glows that you see. As the electron falls into its usual orbit (or electron shell, see: http://en.wikipedia.org/wiki/Electron_shell) it gives off the remaining energy it had originally absorbed from the UV light, in the form of lower energy/higher wavelength, visible light.

So there you go, a nice and not too technical explanation on how UV causes fluorescence! As always, be sure to pass by our frequently updated blog for the latest and greatest UV information, and indeed the most up-to-date urine eradication systems and technologies!

Want to join the discussion?
Feel free to contribute!

This site uses Akismet to reduce spam. Learn how your comment data is processed.

Followon TwitterSubscribeto RSS Feed
The PeeDar & Its Many Other Uses…

Do I Need UV Glasses When Looking For Invisible Pet Stains With UV Flashlig...
Scroll to top

This site uses cookies. By continuing to browse the site, you are agreeing to our use of cookies.

We may request cookies to be set on your device. We use cookies to let us know when you visit our websites, how you interact with us, to enrich your user experience, and to customize your relationship with our website.

Click on the different category headings to find out more. You can also change some of your preferences. Note that blocking some types of cookies may impact your experience on our websites and the services we are able to offer.

These cookies are strictly necessary to provide you with services available through our website and to use some of its features.

Because these cookies are strictly necessary to deliver the website, you cannot refuse them without impacting how our site functions. You can block or delete them by changing your browser settings and force blocking all cookies on this website.

We also use different external services like Google Webfonts, Google Maps and external Video providers. Since these providers may collect personal data like your IP address we allow you to block them here. Please be aware that this might heavily reduce the functionality and appearance of our site. Changes will take effect once you reload the page.